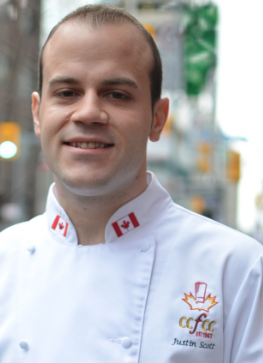 Chef Justin Scott has a philosophy of cooking with seasonal local, natural, and sustainable plant based organic ingredients at their peak ripeness and freshness with his catering company Kudos Cuisine. In 2015 he was awarded the Eat Well leadership award at the Ottawa Health & Wellness Expo and was a finalist in 2016. It was here that he also won two healthy all raw and vegan recipe challenges. He achieved his Chef Training and Culinary Management diplomas at St. Clair College in Windsor, ON after completing his culinary arts apprenticeship. He also obtained his Red Seal professional chef certification. After moving to Ottawa he became a personal Chef and worked in the kitchen brigade within the House of Commons on Parliament Hill. Justin is currently a culinary instructor at the LCBO as well as a Chef at Pure Kitchen Vegetarian Food & Juice Bar. He is the featured Chef of the Healthy Living & Cooking Show on Rogers TV. Justin has done numerous workshops, fundraising dinners and being a guest speaker for Ottawa books human library and various Canadian Government sectors (Immigration & Industry). Justin teaches Holistic Food Preparation at The Institute of Holistic Nutrition Ottawa.